Do we detect all fatalities from collisions with electric lines? A study carried out on the Canary Islands and published on Ardeola answer this important question
The increase in electricity demand over the last several decades has led to the expansion of electrical transmission grids, an important cause of avian mortality through collision and electrocution. The quantification of bird collision rates is commonly based on carcass counts. But does this approach produce accurate estimates of avian collision rates? Do we detect all carcasses present in the field? How many carcasses disappear due to scavenger removal? Are carcasses equally detectable sometime after collision?

There is concern regarding estimates of avian collision rates based on carcass counts, since they understate mortality rates due to three major bias sources: 1) carcass disappearance due to decomposition or removal by scavengers; 2) imperfect detection; and 3) fall of carcasses outside the search zone. Indeed, several authors have highlighted the importance of applying correction factors to allow correct quantification of actual mortality (see review in Barrientos et al., 2018). Our recent study published in Ardeola addresses these sources of bias at electric lines on two Canary Islands (Lanzarote and Fuerteventura), providing correction factors to obtain unbiased estimates of bird mortality rates. In addition, in order to optimise the methodologies employed on the search of carcass, we carried out a cost-effectiveness assessment of carcass search around electric lines.

The first finding of our study was that carcass persistence rates decreased with time elapsed since carcass placement, and this decrease was higher for small-sized birds (Fig. 1). From a carcass disappearance experiment we observed that only 2% of very small birds (i.e. chicks of Domestic Chicken Gallus gallus) remained 30 days after placement, whereas this proportion increased up to 50% and 80% for medium-sized (i.e. Rock Pigeons Columba livia) and large birds (i.e. Domestic Chickens), respectively (Fig. 1).

Figure 1 Proportion of carcasses of small, medium and large birds remaining in the field 1, 3, 7, 15 and 30 days after placement

The overall probability of detection of carcasses was 0.134, which means that around 86.6% of carcasses went undetected. Carcass detectability was habitat-dependent, decreasing in rocky and stony areas where an observer’s attention is focused on foot placement rather than on carcass search. Moreover, it was lower for small-sized birds and for older remains (i.e. in a more advanced decomposition-fragmentation state). This result suggests a joint effect between body mass and carcass age, since for instance, a large bird such as a Common Raven Corvus corax may be less detectable several months after collision than a recent fatality of a smaller bird, such as a Eurasian Collared-dove Streptopelia decaocto.

Information on carcass dispersion patterns from the axis of electric lines is scarce, despite being a key aspect of the definition of the searchable area. One important finding of our study was that large birds are more likely to be found near the line than small birds, and both tend to fall further away at taller electric lines. Therefore, the sampling belt should be defined according to the height of the electric line, taller lines demanding broader search areas. 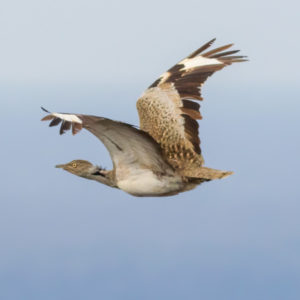 Finding a balance between sampling costs and carcasses detected

The evaluation of dispersion patterns of carcasses along with a cost-effectiveness assessment of carcass search allowed us to identify a 27m distance threshold at which the cost effectiveness of searching for carcass reached its maximum, considering time-effort costs and the number of bird fatalities recorded (Fig. 2).

Lastly, combining the information from the dispersion pattern of carcasses around electric lines and their detectabilities, we carried out several simulations to ascertain the theoretical proportions of carcasses detected under different sampling scenarios: employing one, two or three observers (Fig. 3). Results show that only 42.6% of large-bird carcasses (e.g. larger than a Eurasian Stone-curlew Burhinus oedicnemus) are detected by one observer, whereas 68.0% and 82.2% of the carcasses are found with two and three observers, respectively (Fig. 3). These percentages decrease for small-sized birds (e.g., Lesser Short-toed Lark Calandrella rufescens), to 9.8%, 18.8% and 27.2% of carcasses for one, two and three observers, respectively (Fig. 3). This information may be useful for environmental managers to balance the costs of sampling effort in relation to number of carcasses found.

Figure 3 Proportion of large-bird carcasses detected around high-voltage lines, combining information on carcass dispersion patterns and detection probability. Observer positions are indicated by arrows on the X axes. A) one observer; B) two observers; C) three observers; D) Total proportions of carcasses of small and large birds detected at different distances from the line axis by two and three observers

To summarise, unbiased estimates of bird mortality rates are essential for proper estimation of human impact on biodiversity. The correction factors described in this article should be applied elsewhere to account for carcass count losses and to provide accurate estimates of avian collision rates with electric lines. Species- and powerline-specific factors must be considered in order to apply them appropiately.